The Voices In Our Heads 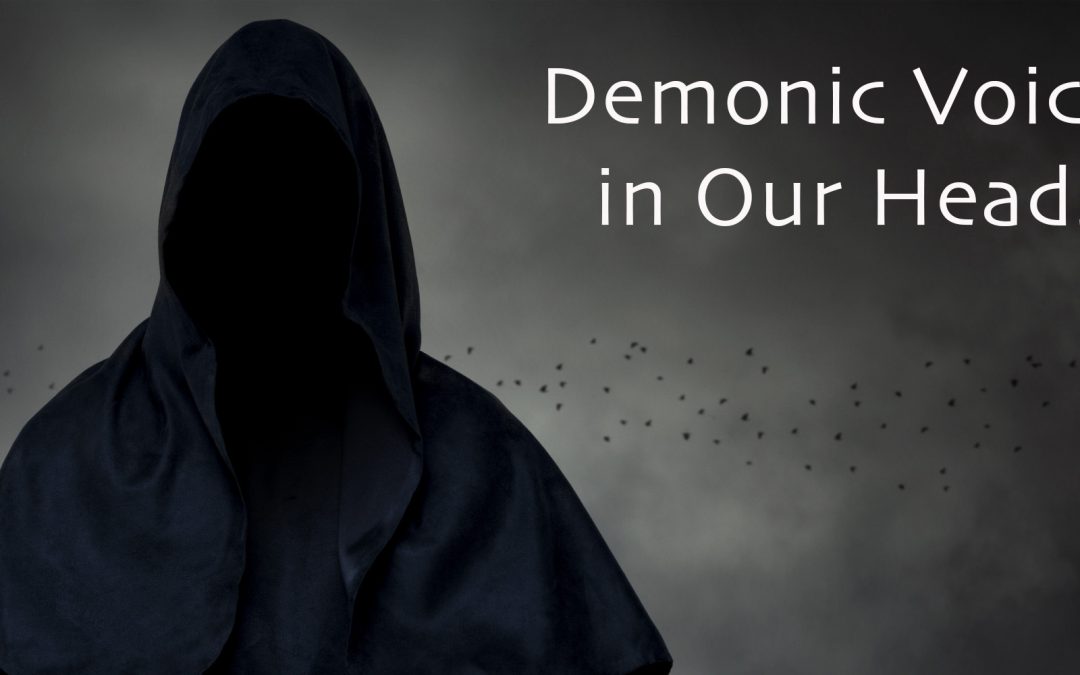 Voices in Our Heads: Our greatest enemy is not the physical voices we hear from without, but the dark foreign ones within

We all know about those pesky voices in our heads. I don’t mean the good voices, but those really bad and depressing ones. They are anxiety ridden, angry, jealous, envious, sarcastic, and judgmental. Sometimes we get a break from them, but most of often we are simply drowning in them.

This disturbing voice is not the product of our aql (intellect). It’s not the kind of logical thinking where we make a rational conclusion that “every thing is wrong with my life, nothing will ever get better!” These bad thoughts come in our heads suddenly, without warning and without much thought. Sometimes they come in the form of a judgment about another person.

Psychologists have called this bad voice “self-talk” or more precisely, “negative self-talk.” This self-talk is not our thoughts according to Gerald Loren Fishkin (see his book here) but chatter that stems from our unconscious.

Self-talk isn’t always bad. Sometimes it is positive. In Islam, the closest term to self-talk is called “suggestions” (khawātir or khātir in Arabic.) These suggestions are voices in our minds that may better be thought of as “mental suggestions.” They are categorized into four categories:

Godly suggestions are the kinds of voices that come from God. They are often powerful and almost compel us to perform a moral action even if every grain of our bodies want to resist it. These suggestions are hard to disobey. Angelic suggestions are more inspirational, they encourage us to do the good but they aren’t as powerful and compelling as the first.

Demonic suggestions are those kinds of suggestions that come out of nowhere but they are very, very painful. They aren’t as repetitive as ego-based suggestions but they are often very depressing. They can also be compelling, trying to force us to do evil. Although we can resist them, they do take a toll on us emotionally. These suggestions can encourage us to hurt others and hurt ourselves. They drown us in feelings of shame, despair and anxiety. When these suggestions are continuous enough, they can lead to serious forms of mental and emotional instability thereby wrecking not only our own lives, but the lives of those around us.

Demonic suggestions can handicap us at times. They lock our minds in vicious cycles of negativity and prevent clear logical thinking. They make us bitter and upset, and make us hate others either through pride, or simply feeling sorry for ourselves.

Demonic suggestions can also be very cunning and at times sound logical (but they are anything but). Take the story of the Devil and Adam (as) in the Qur’an which is very telling. In chapter (surah) 7 of the Qur’an, the following is recounted:

(20) Thereupon Satan whispered unto the two with a view to making them conscious of their nakedness, of which [hitherto] they had been unaware; and he said: “Your Sustainer has but forbidden you this tree lest you two become [as] angels, or lest you live forever.” (21) And he swore unto them, “Verily, I am of those who wish you well indeed!” (22) – and thus he led them on with deluding thoughts (ghurūr). But as soon as the two had tasted [the fruit] of the tree, they became conscious of their nakedness; and they began to cover themselves with pieced-together leaves from the garden. And their Sustainer called unto them: “Did I not forbid that tree unto you and tell you, ‘Verily, Satan is your open foe’?” (23) The two replied: “O our Sustainer! We have sinned against ourselves [or oppressed ourselves] – and unless Thou grant us forgiveness and bestow Thy mercy upon us, we shall most certainly be lost!”

We can learn a few things here. Sometimes demonic suggestions seem rational and convincing. They convince us that our acts of disobedience are for the greater good and hence the more logical alternative to our moral dilemmas. But that is not the case. There is nothing logical about not following through God’s command. Yet the consequences to succumbing to demonic voices are universal. The nakedness of that Adam and Eve felt is analogous to the violation of our minds by Satan. By following his suggestions, our protective and comfort barriers are stripped away from us, thus making us emotionally and psychologically vulnerable. Isn’t that the biggest problem of nakedness? The sense of shame, vulnerability and weakness? This sense of vulnerability is also immediately followed by a sense of profound alienation from others and oneself, especially in relation to the high station that God afforded us (a station which was high enough for God to ask His angels to bow down to!)

These dark suggestions accuse God all the time for the evil in the world. They are saturated with resentment, shame and mistrust. They make us forget ourselves, and break our relations with others. If we allow these suggestions to grow stronger, our mental wounds will simply increase.

So how are we to deal with this problem? The solution is to be found in the infallible Adamic model in the Qur’an. Adam and Eve both immediately accept blame and ask for God’s forgiveness. In the Qur’an, they both acknowledge that they have wronged themselves and not God, meaning that the only person they harmed were themselves. They then proceed to sincerely repent to God.

The story is very telling on many ends. The story of Adam, Eve and Satan is a story of two radically different choices. When Satan was reprimanded by God for his disobedience towards Him, Satan blamed God. He blamed everyone but himself. He said “now that you have led me astray” (Chapter 7, verse 16 of the Holy Qur’an) whereas when Adam and Eve erred, they blamed nobody but themselves.

More importantly however, acknowledging the severe harm caused by the dark Satanic voice was the single most important factor in rejecting the demonic invasion of their lives.

We often allow ourselves to be subjected to Satan because we do not fully comprehend the actual damage he is doing to us. To the contrary, we may find satisfaction in those suggestions, either through feeling sorry for ourselves, or relishing in the bad thoughts we harbor against others.

When we realize the destructive and corrosive effect the Devil has on our minds, we are compelled to seek forgiveness and thus purification from God. This realization is a constant effort. It is not just an idea. It is an effort that must be turned into a habit and eventually, by the Grace of God, become a second nature to us.

With the help of God, it is this life long struggle against the chaos of our minds that defeats the Devil and his suggestions. Our hope is that by controlling the inner demonic voices in our heads, this struggle will one day make us eligible to acquiring inner and mental peace.